In Haiti, a second humanitarian crisis is unfolding: **Haiti’s women are under siege from increasing insecurity, **which has grown steadily since the earthquake devastated the country in January. Facing violence and rape, Haiti’s women operate within discriminatory legal structures which prevent them from accessing aid and taking an active role in their country’s redevelopment process. 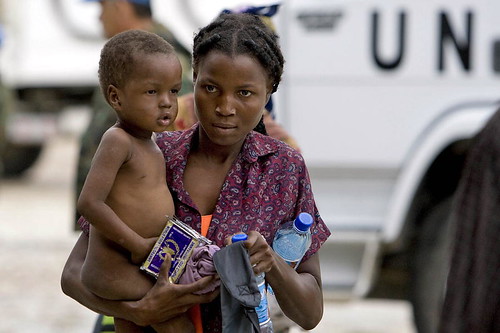 This must change.Digital Democracy is focusing on how technology can be used to to amplify the voices of Haiti’s women and ensure their protection. **We need your support today to invest in Haitian women. **

On Wednesday my colleague Abby Goldberg  and I are traveling to Haiti to work on exactly that. Working with international agencies and grassroots women’s organizations, we’re focusing on how technology can be leveraged to protect women, and conducting media workshops with women’s groups.

Here’s the reality on the ground for Haitian women: In displaced persons camps and tent cities, women are struggling to access food, shelter and security in the face of increasing attacks and rapes. This violence exists within the context of existing discrimination. Before the earthquake, it is estimated that 8 out of 10 had been victims of violence, and 3 of 10 victims of sexual violence. Haitian women work for lower wages for longer hours, and are more likely to work in the informal sector. Rape was not considered a crime until 2005, and Haitian women face stiffer penalties for adultery than men. Land rights are denied to women, yet approximately 43% of households are headed by single mothers, meaning these women and their families will not benefit from agricultural reforms and stimulus aid.

Here’s what we will do: Despite the dire circumstances, we have met inspiring Haitian women working to change the situation, and we are traveling to Haiti to support their efforts. On our trip, Abby and I will be focusing on two areas: ·   Harnessing technology to report incidents of sexual violence and provide protection for women & girls ·   Media trainings for Haitian women’s organizations to amplify their voices, stories and needs to the larger community.

Why we need your support: We don’t plan to only meet with women in Haiti, we want to leave them with equipment for them to produce their own media, which brings our  total trip costs to $7,500. Thus far we’ve raised $2,150, enough to get us on the ground, and we need your help to raise the rest. Donate to our fiscal sponsor IMTD today to support this project and invest in the women of Haiti.